Create a series of posts with navigation in Jekyll

Add Jekyll posts into a series with series navigation. 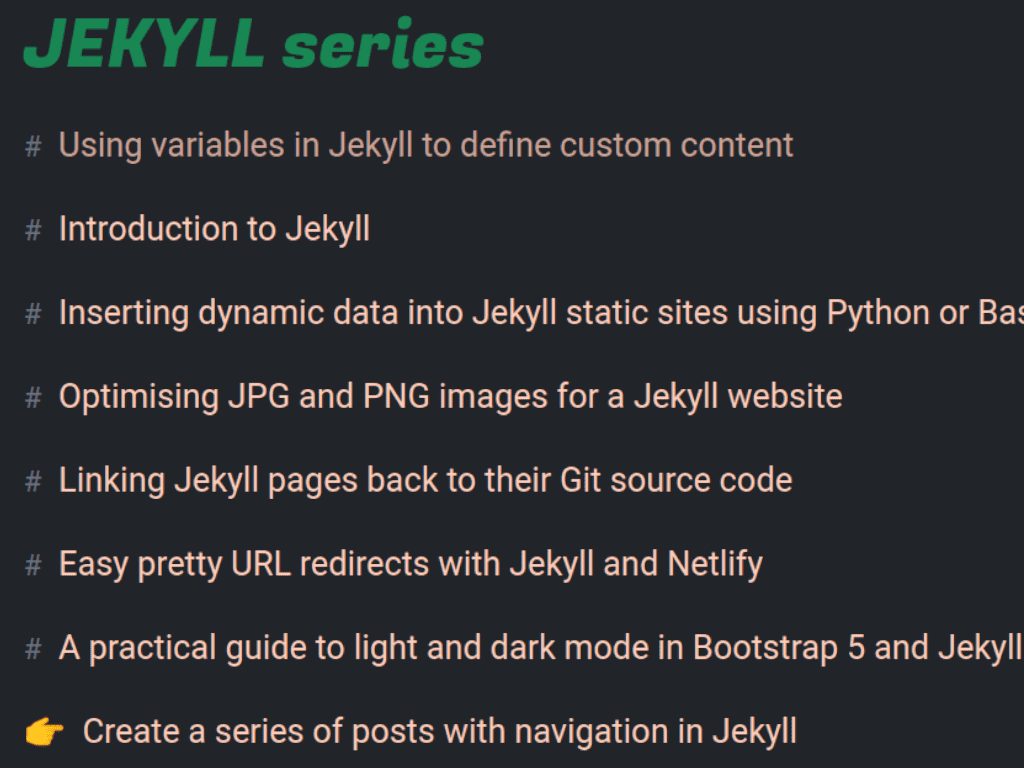 Blogging about individual self-contained ideas is great. But some ideas require a more structured approach. Chaining together simple ideas into one big whole is a great journey for both the writer and the reader. Which is why I wanted to add a Series feature to this Jekyll blog. As you may have guessed already, Jekyll’s high degree of customsation makes this a breeze.

What I want to achieve is:

Given Jekyll’s high customisability there are several ways to handle a series. Either we can leverage Jekyll variables in the config to keep a list of series. Or we can use collections. Or define a Liquid list somewhere in a global template and iterate over it.

The cleanest way is to keep the series along with the posts contained in that series. For example, for all the posts in the Jekyll series, I’ve added the following 2 variables in the post front matter:

The first variable, is_series, is a simple boolean which says whether this post is part of a series or not. Booleans work great with Liquid filters and will allow me to filter only those posts which are part of a series. This will come in handy later on when we’re trying to list all the series in one go.

The second variable, series_title, is the title of this series, in this case Jekyll. It’s important that posts in the same series contain the exact same title. We’ll use this title to match posts to a series. If it contains extra spaces or special characters it won’t match the series.

You can view the source-code for this here.

This blog uses the posts layout to display posts. To display other posts in the same series as the currently viewed post, I’m using the code below:

The logic above goes as follows:

I’ve stripped some of the HTML for clarity but you can view the full source-code here.

Step 3: Adding links to all series to home page

We now have the post pages showing links to other posts in the same series. Next, I want to add a navigation to all series under a category on my home page.

For example. On the home page, the Technology section should show all series in Technology. The same for Life Stuff, Video Games, and META categories as well. This will make it easier for users to browse and read a complete series.

To identify all series for a particular category, I’m using the code above, which:

You can find the full source code here.

Jekyll’s high degree of customisation is why I enjoy working with it so much. And why this blog’s underlying Jekyll engine has survived redesigns and refactors. Jekyll makes it easy to add dynamic logic to your otherwise static website. And while my website remains static, the logic that renders it doesn’t have to be.

There are many improvements you can make to what I’ve shown you today.

One improvement I’m thinking of is handling series post ordering. For example, right now the posts in a series show in ascending order of their publish date. But I’ve published several posts belonging to a series at different times. So I can add a series_order key and use it to order articles rather than their publish date. This is one of the many ways you can build your own series feature.

Create a series of posts with navigation in Jekyll